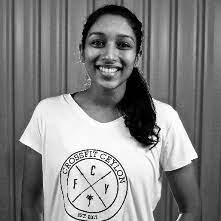 Keshini, who was previously a Bronze medal winner at the Rowing Nationals in 2011, was introduced to CrossFit in early 2015 during a class Andy was coaching and ever since then have been training partners. After just a year of CrossFit and under Andy’s tutelage, Keshini won the Gold medals in both at Colombo District Weightlifting Championships and the Western Province Weightlifting Championship in 2016.

Keshini genuinely inspires others to be better on a daily basis as she continues her own pursuit of excellence.