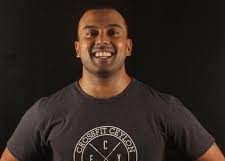 Andy discovered CrossFit in early 2013 in an effort to increase the power of his golf swing. In an effort to learn more, he attended the CrossFit Level 1 seminar in Spring 2014 shortly after which he migrated back to Sri Lanka. With the introduction of CrossFit into his training regime Andy not only saw an increase in the power of his golf swing but he started to see a significant increase in his strength. Before long, Andy was registering himself in weightlifting competitions and found success almost immediately by coming in Second Place at the 2015 Sri Lanka Novice Weightlifting Championship. In both 2016 and 2017, Andy was able to take the Gold Medal at the Colombo District Weightlifting Championship and Silver at the Western Province Weightlifting Championship.